Memories, remorse, and words make up the broken mosaic of the protagonist’s mind.

The plot of the narrative short film Mosaic, directed by Mars McKay, unravels from a universal human feeling: it is the story of a young man coping with the grief following the loss of a friend.

The mosaic theme is used as a metaphor, but it is also taken up visually in the film, shot on a low budget with a 4k camera. The film’s visual component is strong and articulated in color, light, and space.

First and foremost, the use of light is striking, in a photograph that brightens as the protagonist’s feelings become clearer, emphasizing the process, shown rather than told by the director, in which he overcomes pain by looking within himself.

Spaces also play a powerfully symbolic, diegetic role in this film. Enclosed, cramped, and oppressive spaces emphasize the impossibility of breaking out of a cage of pain, and the shots shift from being tight and suffocating to a large field in an open space.

With balance between narrative delicacy and symbolism, the film’s finale restores both from an aesthetic and narrative level the protagonist’s healing and the newfound harmony among the colors of his mosaic. 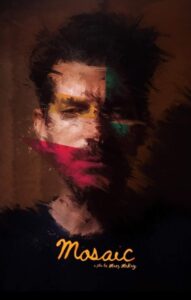