Posted at 15:37h in Reviews by prismaadmin

Young director Nicolas Seguel tells a dramatic story of rebirth in Underwater, plunging us into the intimacy of a former teenage athlete touched by the sudden loss of her father, and for whom it becomes more difficult every day to reintegrate herself into a life that goes on while hers has come to a halt.

A story that investigates loneliness and memory, through which the director sensitively probes the inability to communicate and the pain felt by the protagonist, who seems almost like a creature estranged from her world and crystallized in memory.
If water has been used in film history as a metaphor for life, rebirth, and loneliness, in Underwater what happens under the water’s surface seems to belong to a distant dimension. The pool that Mara abandoned after her trauma is now used by a younger sister Lisa, a kind of doubling of the protagonist in which she reflects herself but does not recognize herself.

Water also represents here the dimension of the protagonist’s unconscious, thanks in part to scenes of the particular technical and aesthetic beauty of underwater dance, a moment of freedom in which pain seems to disappear. A coming-of-age story in which the very young girl will be forced to go through a direct confrontation with the people she loves in order to succeed in breaking through the armor of pain in which she has enclosed herself and return to inhabit the world in which her dreams are realized. 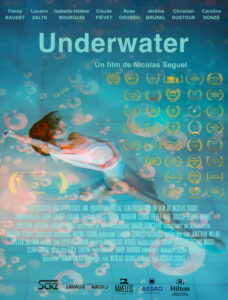