«With Joyful Ring» by Gary Karapetyan

Posted at 14:38h in Reviews by prismaadmin

It is said that the worst time, for those who are unhappy, is during the traditional holidays, particularly Christmas, when the crush of lights and festivities casts an even more unforgiving light on one’s condition.

This thesis gives the idea of the short film written and directed by Gary Karapetyan, a graceful exercise in style that uses no dialogue but juxtaposes suggestions and absences, in which the depressed protagonist indulges in the desperate sweetness of memories of times spent with his woman.
The opulence and warmth of a bourgeois home, warm and richly decorated but empty, effectively clash with the loneliness of the protagonist of “With Joyful Ring” as well as the choice of alternating colors and absence of them in the rhythm between present and memory. Between tenderness and despair, silence and absence introduce the portrait of a small world crystallized in the absence and the irreconcilable rift between before and after. Karapetyan offers us an intense yet harmonious exploration of the theme of memory, which is now a tool for surviving pain and now the origin of an obsession, a knife that digs at the heart of what remains when the object of love disappears. 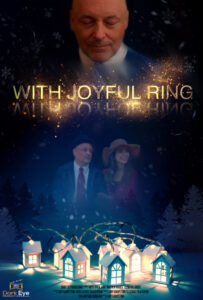