Posted at 12:51h in Reviews by prismaadmin

For many months now, the agitation of a generation of young people in Iran, in rebellion against the absurdities imposed by the established order, has risen to Western headlines, generating unqualified participation. The desperation and courage of young women and men propagate its force around the world, but it is often difficult to understand the day-to-day conditions that led to the deflagration of the uprising.
This is why a film like Dandelion Season is especially valuable.
Hanna, a young Iranian woman torn between a family that, while loving her, wants to see her married to a man she did not choose and her dream of becoming an established filmmaker, will fight with all her might to make her voice count.
Maryam Pirband stages a social cross-section by highlighting all the nuances that exist in a family relationship strained between culture and individuality, between love and oppression.
There are no good guys and bad guys in Dandelion Season, but human beings crystallized in a historical and spatial moment and a widespread incommunicability that withers and makes them lonely.

The intimate story of a girl seeking the impossible to emancipate herself, as a woman and as a filmmaker, moved by a sacred fire for art and a heroic hope, turns into a universal tale about ambition and the search for identity.
A necessary film that speaks on many levels, and one that everyone should see to overcome prejudices and grasp the complexities of a subject often treated too superficially. 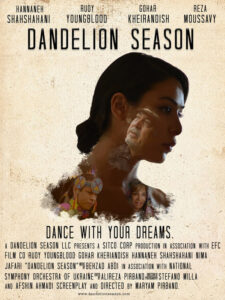