12 Dic An interview with Morag Brownlie, director of “Perfect Storm”

Posted at 11:02h in Interviews by prismaadmin 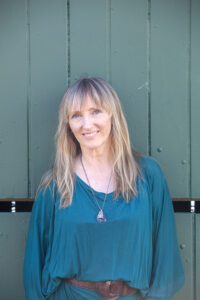 «Cinema is liminal threshold between reality and ones imagination , a window of time where all is possible.
»

Morag has shared her imaginative spirit, concepts and striking visuals for film, dance theater, fashion and live special events. She has been on both side of the camera and has performed in short films and many dance-theatre productions.

She began her love of film helping friends make art school films at University. She then studied full-time dance at a Maori performing arts school “Puawai” after that she gained a Diploma in Contemporary Dance at ” The Performing arts school of Auckland. She then headed off to Tanzania to study African dance at “The Bagamoyo college of Art”.

Apon Morag’s return from Africa she made two full length Multimedia shows collaborating with film makers, dancers and animators. Morag made Super-8 stop-frame animations and many experimental films. She was back to the medium she loves and was hooked.

Morag has produced, directed, distributed (and more recently edited) 3 short films. Her current short film “Perfect Storm” was made about, and in and out of Lock-downs in New Zealand. It has had numerous selections, nominations , finalists, and a couple of awards.
It had its World premiered at the stunning A-list Warsaw Film festival in Poland. Perfect Storm shared its premier by opened the amazing Thessaloniki Short film festival in 2021, where it won a Cinematic achievement award.
For Perfect Storm Morag won best female editor at the Toronto Woman’s film festival.
It toured new Zealand in the Nga Whanaunga programme of the New Zealand International film festival.

Morag was nominated in the Nokia N.Z film awards for best contribution to short film as Director for her first short film “Mes Mer … “.
This film was accepted to many international film festivals including HOF in Germany and was distributed for most of a decade throughout Europe by Inter-film.
Morag presented the film at the Hawaii International film festival HIFF.It played in cinemas before The Big Labowski and There is something about Mary .

Her 2nd poetic/ experimental, yet full of commentary on modern life (that now looks prophetic) film called “Rover”, screened throughout N.Z in the International film festival and also in Germany. 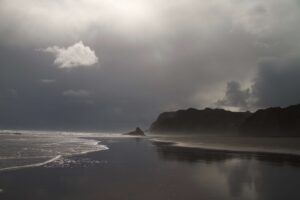 What is a “perfect storm”?

A transformational, rare combination of circumstances creates a significant portal to pass through. The pandemic has been a Perfect Storm and one that has touched everyone in some way or another. 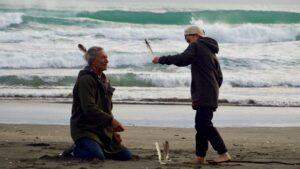 Watching Perfect Storm, one has the impression of being transported to another dimension, from which the real world seems so far away. Do you think this is an effect of the lockdown or a characteristic of the place where the story comes to life?

Yes, great question. But it is a real dimension, that is always there but we seldom access it in our busy lives. It is a place/ space more often reached with spiritual practices – 40 days in the desert sort of thing.
We all had this opportunity during the sudden stopping of all normal activities and connections with others. 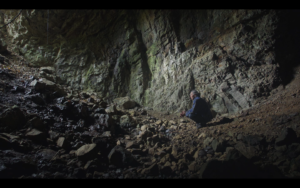 Your film has references to Maori culture, starting with its main characters. Why and how did you choose to entrust the message of your film to this symbolism?

I was thinking about the pandemic and the world being instructed to stay away from others, to wear masks, and not share air with others.
I wanted to finish my film with a message of hope -to show that once the storm of the pandemic is passed, we will be able to do the opposite again.
Kissing might have been an obvious choice but it struck me that a better and more poignant metaphor, for the polar opposite of lockdowns, isolation, and fear of air-born contagions, would be the Maori greeting which is called Hongi.
The Hongi is a sharing of each other’s breath or life force, and of that moment in time. This is done by respectfully pushing noses/ foreheads together and breathing in.

Also my theme of how people during their isolation, got more in touch with where they lived and the creatures that shared that space with them. Lockdowns provided a silver lining -an invitation for people to reconnect to, and acknowledge nature.
Maori culture and Pita Turei himself, connect strongly to nature, the environment, the landscape, and the sky /star-scape here in Aotearoa ( New Zealand ) so it all flowed naturally. 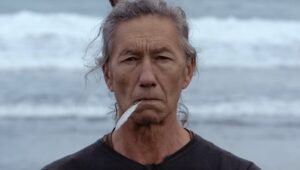 The photography in the film is particularly beautiful and in harmony with the delicacy of the emotions described. How did you and your team achieve this?

Thank you. The DOP was coming through a photography project that was very personal. Phill Prendeville had been grieving the loss of his father and wandering the beach often alone. I saw some images he shared and asked him to collaborate.
For him to make a film where a man and his grandson were separated and wandering this lonely beach, was in tune and symbolic for him.
Filming in winter full of storm clouds and mists was perfect for the theme. Phill and the other photographer Sam Evans live at the beach and know it inside out, if a weather pattern appeared they were there on site. The actor and collaborator Pita Turei has also lived on that wild coast and is very connected. They all have a very close relationship with the beach which is one of the main reasons I chose them to work with, and it matched the philosophy of the film. I don’t think I could have made Perfect Storm with others. 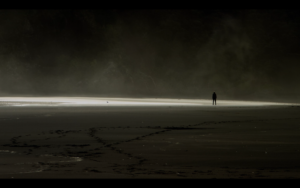 Writing a delightful and inspiring feature film, working up 2 short films: one in collaboration with French actors in Paris.
I also have a couple of ideas for the series that I need to get on paper!