Posted at 15:10h in Reviews by prismaadmin

Director William Stancik, after gaining international recognition for his short and feature films of various genres, is once again challenging himself with a tough and shocking drama film.
His latest work “Mia Undone” deals directly with the issue of violence against women, and he does so through the life and eyes of the protagonist, Mia, and those who try to stand by her as she tries to rebuild her life after a traumatic event that destroyed her. The author’s radical choice is to show us the protagonist not while she is a victim of abuse, but at a mirror moment and perhaps even more difficult, that of returning to normalcy.
The writing behind the film is sharp, and pressing, the viewer is not spared the pain and distrust felt by those who have seen evil up close, but at the same time, it restores dignity and value to a universal story that must be heard in all its brutal truth.

Despite its rough cut and a realist slant that leaves no room for do-goodism and easy morals, the film leaves a message of hope, in its narrative plan and also in its use of light, which seems to suggest that there is always sunshine behind the clouds. 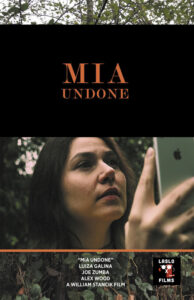