«The First Night» by Silvia Gregorova

Posted at 14:56h in Reviews by prismaadmin

The First Night, made by Czech director Silvia Gregorova is evidence of a very successful exercise of style, and not without charm, in adapting a classic to a different space and time, while retaining its narrative core, and evoking the timeless atmosphere of a small human comedy that repeats itself identically throughout the centuries.

In fact, the plot is that of Prima Notte, a novella by the innovative playwright Luigi Pirandello, dating back to the year 1900, yet it manages to make the story of a comically unhappy marriage between two different people united by loneliness and existential precariousness feel current, universal.

The young girl and the man, will be driven into each other’s arms by benevolent and meddling relatives, both bewildered, revealing to us a pure human nature at the mercy of events.

A few changes are implemented in the fabula and plot of the story, succeeding in telling the small world in which the story takes place, the theater of the characters, in a bizarre affair in which helpers and antagonists are mixed, and the place where the characters feel at home is the small village cemetery, resulting in a fascinating and mysterious inverted fairy tale. 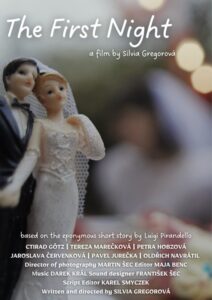