«Mauthausen: When The War Is Over» by Panagiotis Kountouras, Aristarchos Papadaniel

12 Set «Mauthausen: When The War Is Over» by Panagiotis Kountouras, Aristarchos Papadaniel

Watching the first few seconds of “Mauthausen: When The War Is Over,” the setting and characters, as well as of course the title, seem unambiguous.

Instead, it is a love story told in verse by the main character. The story of a love born in a concentration camp, when – on Sundays – women and men prisoners looked at each other through barbed wire.
The work by the two directors Panagiotis Kountouras and Aristarchos Papadaniel is based on the work of the same name by Iakovos Kambanellis, a poet born a hundred years ago in Naxos and interned at the age of 20 in the Mauthausen concentration camp, who dedicated his life and talent to remembering and passing on his direct experience; but not only that, ranging between poetry, art theater, songs and cinema of the dramatic genre by signing a series of works that tell with realism but also lyricism, the difficulties, the struggle, but also the strength and hope of the Greek people.

Through images from the lyrical drama, the erotic power of love between two young people stands out against the funereal backdrop of the Nazi death factory.
As originally planned, the protagonist’s interpretation of Kambanellis’ verses is accompanied by cellist Aris Zervas’ performance of original music by Mikis Theodorakis, a well-known Greek composer who passed away last year.
It makes this work not only an extraordinary experiment, which takes full advantage of the possibilities of a bleak and enclosed stage layout while respecting the original structure of the opera, but also a powerful means of historical memory and of the work of two great Greek artists.

In this story of impossible love, it is the life drive derived from a love that is the protagonist, annihilating the prisoner’s despair and revealing to us an unexpected, powerful and touching way of remembering one of the darkest moments in human history. 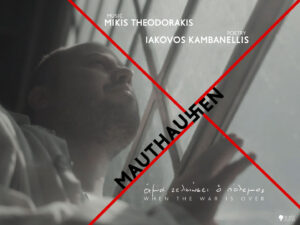