«Between Here and Gone» by Sadie Duarte

22 Giu «Between Here and Gone» by Sadie Duarte

Posted at 13:52h in Reviews by prismaadmin

Dax has always found strength and happiness in rock music, but for some time now this has been coming more difficult for him, and now even his body is betraying him, like an out-of-tune instrument. The man seems to have lost hope; however, everything changes the day he meets Dallas, a girl with a difficult personal life who nevertheless does not want to give up her dream of becoming an artist.

Between songs and silences, painful realizations and outbursts of tenderness, director Sadie Duarte skillfully blends different languages and styles, and the result is a true rock fairy tale with a sidekick, a villain, and the fate that the two protagonists will have to take into their own hands.

This is an ambitious project, experimenting with the genre of the musical in an unexpected and original way, and at the same time capable of earning cross-cultural acclaim: in fact, the film has racked up more than 10 international awards in its recently started festival cycle.

Despite its small budget, the film is the result of teamwork and harmony between the cast and crew, who, led by the director and her assistant Jesús Marco, shot the short film in just a few days and then devoted themselves to a lengthy editing process before its release.

Capable of blending comedy and drama, Between Here and Gone shows the harshness of life that can clash with dreams, but conveys a message of hope to those who know how to listen to the rhythm of emotions. 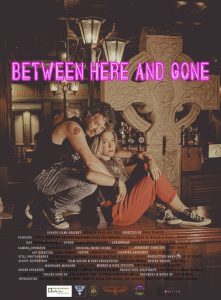