«Abduction of the Fourth Kind» by Brett A Wilson

16 Mag «Abduction of the Fourth Kind» by Brett A Wilson

Posted at 11:58h in Reviews by prismaadmin

A solid cast and great teamwork bring to light the first feature film by Brett A Wilson, already the creator of numerous genre shorts and an award-winning actor.

Abduction of the fourth kind is an ambitious project, combining the classic sci-fi flick with the drama of an American family reunited to fight against unknown forces.

It features various inspirations from great American classics of the small and big screen, interpreted in a very personal way by an author who infuses a particular enthusiasm into a story of great action and subtle plot architecture.
The considerable production effort in the making of a film like this is evident, and it demonstrates considerable creative and technical skill on the part of the director.

This story, ostensibly about presences from other universes, deals with deeply current social problems, hidden fears that we often forget we have but that endures beneath the layers of consciousness.
The pressures, doubts, nightmares, and lies that a community faces reveal something profound about human nature and how it behaves when in danger.

The stakes set by Wilson in this film are high, and the result is a carefully crafted and beautifully constructed film. 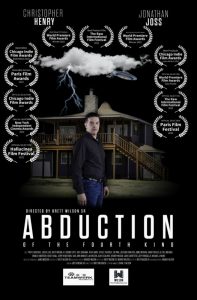