Posted at 15:09h in Reviews by prismaadmin

More than an animated short, AstroVoyager – Mission SuperHabitable is a beautifully immersive experience that greatly uses the medium, with technical skill and great creativity.

Set in a dystopian reality where Earth is under threat, the protagonists of this story are searching for an alternative planet to inhabit. It is the story of humanity making difficult choices, moved by the hope of a better future.

This project is the result of the meeting between the animation studio YAK PROD, composed of Antoine Alonso and Maxime Attou, directors and 3D artists, who make animations inspired by the Japanese aesthetic of the 1980s, and the artist Astrovoyager, a producer of electronic music, who merged their universes and languages to create this work.

The music in this film is indeed vital, and interpenetrating with the images it covers every spectrum of emotion in this galactic adventure until it symbolically becomes the banner that unites transcendentally different realities, and is capable of conveying more than any words a message of universal peace.

Seemingly pessimistic, this film makes us reflect without giving up a note of hope. 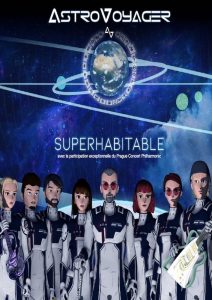