03 Mag An interview with Hsuan-Wei Wu, director of “I’m Home”

Posted at 14:09h in Interviews by prismaadmin 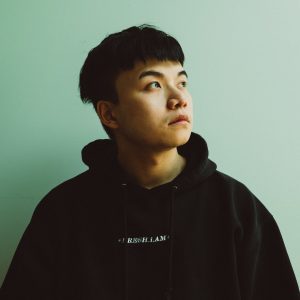 «Shoot what you know and know what you shoot.»

Hsuan-Wei Wu (Jackson) is a Taiwanese Christian filmmaker, an MFA film graduate at City College of New York, and the BAFTA NY 2020 DLT Entertainment Scholarship recipient. His short film “The Angel in The Globe” has won multiple short films and student awards and has screened in film festivals all around the States. His latest short film “I’m Home”, which is currently running in festivals, has also won awards from ICVM Crown Awards and Centre Film Festival. Hsuan-Wei focuses on making films about Asian Culture, gospels, and human connections; he wishes to show the world a more comprehensive depiction of Taiwan and its people. 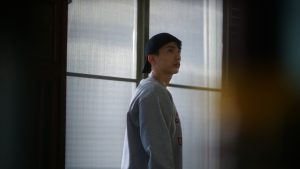 The issue of misunderstanding between parents and children is a theme that is very much felt by young authors, especially if they come from countries where the latest generations have experienced a real revolution in culture and customs. Did you draw anything from your personal life experience for the realization of this story?
This story came from a mix of my relationship with my father and his relationship with his father (my grandfather). In a Taiwanese family, conflicts do not necessarily come from verbal arguments or physical assaults but from the lack of communication and the inability to express oneself effectively through words, especially from the older generations. As the main character Jay, I used to struggle to understand my father’s way of expressing love. 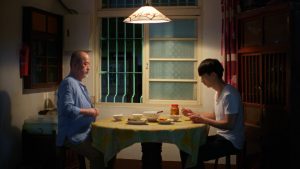 The film’s cinematography is particularly refined and apt to depict the delicacy of a torn but still living bond. How did you arrive at this result?
I love shooting photos in my leisure time and I always wanted to create something that when you pause at any moment can be a still photograph. When I told my DP what I want this film to look like, a memory, a photo book, he immediately understand and provided a lot of support on creating the shot lists and the look of the film. I love to frame my subject inside a frame on the location (door frame, mirror, electric lines, etc.) to create something that looks minimal but felt constrained. I also love long and static shots to show the character being foreign and alone. Cinematography is an invisible character and by using that character well, it will speak for your story. 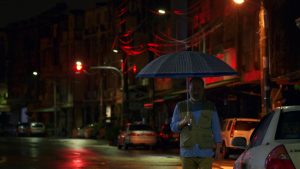 As a young filmmaker, from which more or less known authors do you draw inspiration for your work? And why?
For this film specifically, I studied a lot of Taiwanese filmmakers such as Hsiao-Hsien Hou and also Edward Yang. This is actually my first film that was shot in Taiwan. I want to know how they use the environment to tell the story because that’s a big part of my film. Also, I learned a lot from the pacing of the film and how to use silence to evoke and convey emotions. 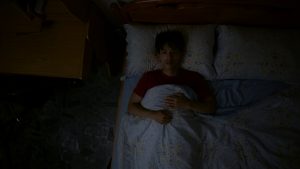 The story of «I’m Home» is an intimate domestic tale, and takes place in contained environments where shooting requires special care. Do you have any particular memories or challenges you encountered, in your moments on set?

The biggest challenge is that it all takes place inside one location (my grandparents’ old house) and during a hot summer in Southern Taiwan. Not only the temperature tends to get a little too warm, but bringing equipment up and down using stairs that only fits one person at a time, was quite an experience. I remember in one of the night scenes, we need to set up lights in a neighbor’s house right across from ours and aim it at the bedroom, which was a brilliant idea, but also quite challenging, not to mention about the rain.

What kind of projects are there in your future?

I’m planning to continue exploring cultural, religious, and family-related topics, not necessarily in the same style, but definitely, the stories that have meaning to me.