«Before I Sleep» by Victoria Shefer

15 Apr «Before I Sleep» by Victoria Shefer

Posted at 14:00h in Reviews by prismaadmin

Before I sleep is a unique art short film that stages a universal story of loss and rebirth in a remote natural setting that suggests immersive, ancestral emotionality.

This film is the story of a woman, Ms. Barrow, who returns each year to face the sea that took her daughter from her, finding herself facing the waves of the sea probing the depths of her own grief, in which the wounds of the past are reflected in the moment of the present as a warning.

The photography makes the most of the romantic and murky ambience of the winter sea, creating a chilling and evocative atmosphere for a costume drama in which the protagonist moves, restoring an internal laceration followed by the camera with almost abstract delicacy.

Devoid of dialogue, the film is filled with the stirring recitation of the poem «Stopping By Woods on a Snowy Evening» by Robert Frost (1922), with its beautiful verses that point straight to the human loneliness that finds solace in the most rugged nature.

The result is a character study of a lost soul – unusual, austere, tragic, in a richly atmospheric and uncomfortably dark setting, which, however, does not fail to suggest a glimmer of hope and strength in the face of pain. 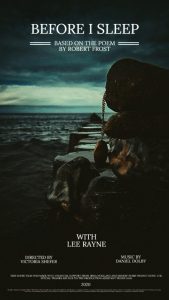