«No More» by Fabricio Estevam Mira

Posted at 15:49h in Reviews by prismaadmin

No More is a radical and disturbing experiment that does not set any limits in investigating physical and psychological pain, in which the body is a real battlefield and consciousness is altered.

Between weird and performance, No More digs under the skin like a blade, and due to its extreme character, it cannot be called a film for everyone.

But if you have a strong enough stomach, you will find emotion and truth in it, from a brutal and merciless perspective rare in contemporary cinema. Suffering on the screen is and appears to be, duly experienced rather than simply represented. The director, and protagonist,
Fabricio Estevam Mira gives his soul and his body to this film, restoring a vivid and emotionally agitating atmosphere and material and carnal pain.

It is indeed remarkable to know the behind-the-scenes of the production of this unique short film that has conquered many festivals around the world: Mira has subjected herself to an almost unsustainable lifestyle with the aim of making her work credible – and the result speaks for itself.

The story in which the protagonist moves is divided into a series of initiatory passages that show a catharsis achieved through suffering, a high symbolic content that draws from religion and mysticism, and from Christian visual culture.

A real journey into a hellish abyss, without filters and without hope, which will leave you breathless. 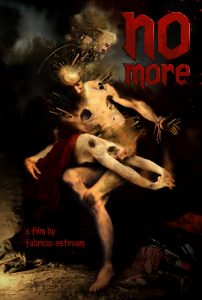