Posted at 16:57h in Reviews by prismaadmin

With this down-to-heart and realistic short film, young director Amritansh Shukla, making his debut in 2019 with the environmental-themed short Every drop counts, returns to direction, addressing the intimate and, at the same time, universal theme of unhappiness.

“Question Mark” is the honest and delicate portrait of inner discomfort.
The protagonist of this cross-section is a young man who apparently lacks nothing to be happy: a good job, a childhood that he remembers with tenderness, and a loving family around him. Yet Vivaan, helped by the psychologist he sees to retrace the stages of his life, ends up being almost forced to admit a lack, a non-happiness that slowly wears him down.

This lack of a practical reason is the fulcrum of the reflection on which this film is built: on the one hand, it almost seems to make things worse, on the other it seems to be suggested that only by accepting the complexity of his own normality will the protagonist really be able to appreciate the little things and to be happy again.

If the content is mainly entrusted to the dialogue between the characters, the form chosen by the director reflects the plot from an aesthetic point of view: the slowness of the film seems to suggest a still inner time, the slowing down of not having a direction.
The setting, shot entirely indoors, in an environment that physically contains the protagonist’s anguish, opens on the horizon at the end, symbolically suggesting the paradigm shift that took place in the heart of Vivaan.

“Question Mark” deals with a current and sad theme, but it does so without exceeding sentimentality, with attention and honesty but without giving up on transmitting a message of hope. 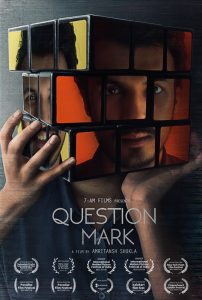