«In A Sentimental Mood» by Zachary Cunningham

16 Mar «In A Sentimental Mood» by Zachary Cunningham

Posted at 15:42h in Reviews by prismaadmin

The intimate cinema of Zachary Cunningham, a young director from Detroit, gives us another work that puts the human being and his emotions at the center.
Right from the title, the director’s debut feature film introduces us to a disarming sweetness that can allay restlessness, as happens to the two protagonists when they meet unexpectedly.

Brilliant, accomplished, each fleeing from a private life about to collapse into a thousand pieces, Jacob and Kacie find themselves face to face in the bubble of a luxury hotel, and between attraction and the desire to get rid of their fears with a stranger, they connect an intense conversation that leads them to ever more remote points of themselves.
Seductive and smooth like the song that gives the title to the film, the role-play between the two soon turns into a session of mutual help in which the knots hidden behind a fascinating appearance are hidden.

«In a sentimental mood» is a reflection on love, choices, and happiness written flawlessly, which tells with great freshness the tenderness and precariousness of the sentimental lives of two Millennials, the last generation of helpless romantics who still trust the kindness of strangers.

A poet, as well as a director, Cunningham attributes a profound meaning to each word used and stages two protagonists memorable for their complexity.

With a light and bittersweet romanticism like a jazz melodic line, «In a sentimental mood» is the debut of an author who has found a personal and universal language to talk about emotions. 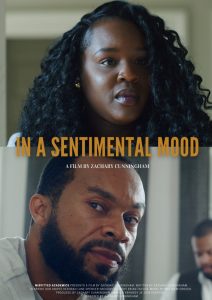