«Other Worlds» by Ivan Maria Friedman

Posted at 14:46h in Reviews by prismaadmin

«Other Worlds» is an artistic manifesto on seeking – and finding – other worlds in the one we live in, looking at it in a different way.

After Wilderness (2015) and Eclipse (2018), in which he took his first steps with the near Infra-Red cinematography technique, Ivan Maria Friedman returns with a poetic short film full of that, unlike the exploration of earthly paradises as in his latest work “Guardians of Paradise”, arises from the need to search for a more distant elsewhere, which we are used to scrutinizing from afar with a telescope: the sky and the bodies that inhabit it.

Of these, Friedman maximizes the material, the surface itself. In fact, the film is made with material shot in the Atacama desert in northern Chile, combined with work in collaboration with a Visual Artist, NASA’s video and photographic archive on the solar system, and the work of two weather cinematographers.

The result evokes explosions in gaseous atmospheres, lunar craters, volcanic formations, leading the observer in a game halfway between the trompe l’oeil and the powerful mannerist fresco of a celestial vault in a contemporary version.

But if in the visual component the director demonstrates an established technical ability and his own aesthetic, it is the music in this film that is the essential, universal and transcendent element, which acts as a hinge between the meaning and the signifier of the film and allows this metaphor – the search for distant worlds in a “near” but the still unexplored world – to be plausible.

This short is a very successful experiment in which the director masterfully uses his own language to probe a personal and at the same time universal human curiosity about an ideal elsewhere, and how it can be satisfied. 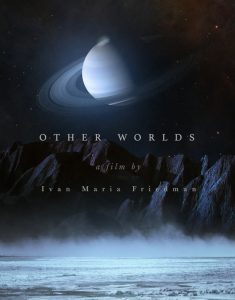