«Married to Math» by Nina Zaretskaya

Posted at 14:12h in Reviews by prismaadmin

«Married to Math» is an thrilling documentary that shows us a little-considered, and particularly fascinating, face of mathematics.

A sort of serendipity, in finding the beauty of the scientific formulas hidden behind the apparently freer artistic expressions.

The director Nina Zaretskaya talks with three brilliant minds, who have in common having received rigorous mathematical training in the former USSR and then decided to devote themselves to art, in different fields: Yana Semenovich to painting, Alexey Shor to composition, and Asya Semenovich to writing fiction.

A flow of music and images flows in front of the viewer, guided to discover the equations that are hidden in the apparently abstract forms, while a component of emotion is added to this discreetly sober film from the story of the three protagonists decision to let out their love for art, a decision not always easy, especially considering the political climate of their formation.

The film uses simple but extremely precise language – and we guarantee you that you don’t need a particular mathematical skill to understand how mathematics has helped these creatives to express their artistic talent.

There are also forays into historical examples of the encounter between culture and mathematics, anecdotes, and curiosities that will make you look at numbers in a different way. 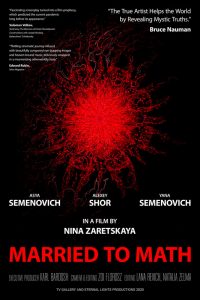