Posted at 11:50h in Reviews by prismaadmin

«Gravidam» (2022) is the second feature film directed by Belgian independent director Brandon Gotto, who in this work intends to explore the abysses of the human mind forced to face unbearable pain, bravely experimenting between genre cinema and introspection.

In a superficially serene, though not entirely happy, atmosphere, Rose and Antoine prepare to welcome the pregnancy of their first child. The happy event, already threatened by some minor inconveniences, comes to a tragic conclusion when Rose has a brutal miscarriage, which will change their daily lives.

The film draws the raw material for a disturbing drama from the primordial force of wounded motherhood, rendered beautifully by Margaux Colarusso’s frayed acting, and works on a double level, between body horror and psychological thriller, emphasized by the chromatic variation throughout the film and also by the decline of his mental and physical health of the protagonist.

The result is an incredible crescendo of tension, which combines a sustained dramatic narrative with an intense visual experience.

«Gravidam» is indeed a well-shot drama, powerfully acted and often disturbing, but it is also darkly fascinating. 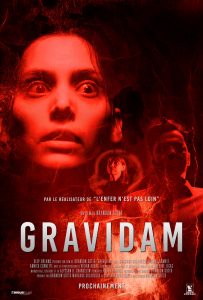