Posted at 13:20h in Reviews by prismaadmin

«Ashes» is an austere and touching portrait that captures the essence of war, not as an epic event but as a tragically senseless reality that annihilates the hopes of two young men, equal but separated from the side of the barricade to which they belong and whom they symbolize.

The aesthetic choice regarding this film, shot in 35 millimeters, in black and white, and without any dialogue, seems to be the only possible way to gracefully carry out the ambitious project of portraying a glimpse of humanity in tragedy, and to restore dignity to lives ended in silence, and which requires a moment of recollection from the viewer.

In this timeless work, Daniel J. Egbert condenses his own raw direct experience in the United States Marine Corps Infantry demonstrating a remarkable artistic talent, in a short film that is never pathetic but intensely lyrical. 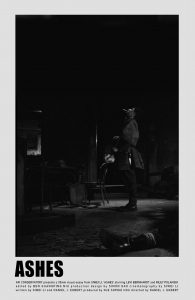