Posted at 15:15h in Reviews by prismaadmin

«Venerable», directed by James Sibley, is certainly not a film we would recommend to anyone who wants a distraction, yet its honesty and emotional truth make it one of the best movies we’ve seen recently.

Opening a window on life, on death, and on what happens in the middle between the two parts of a longtime couple, this minimal short manages to shake and move the audience at all levels, especially for the many who have seen a relative or a friend slipping away because of senile dementia.

The latter, and the loss of control that goes with it, is a harsh subject, and while its sincerity doesn’t spare us from showing it in all its cruelty, Sibley’s film is surprisingly kind, and explores the pains and the limited options that two loving people face each other as old age strikes its final blow: the loss of self.

Without giving in to the pathetic, but restoring a dignity that would seem lost for those in this condition, «Venerable» offers us an honest and touching photograph of a lovingly articulated microcosm, and on a subject that is universal, but rarely told. 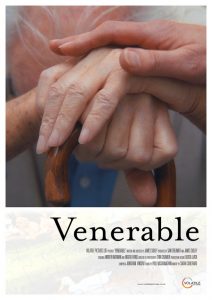