Posted at 12:34h in Reviews by prismaadmin

«REM» is a powerful short film that takes us into the daily life of a perfectly normal young couple, whose tranquility is suddenly upset from within.

The secret that Chelsey has kept in order not to affect the happiness of her relationship with Kelvin, comes out forever changing something between the two.

«REM» is a film with a sober and sincere poetic, which makes love between its protagonists the mirror of a generation accustomed to hiding its pains and functioning despite difficulties, and for which personal relationships are particularly fragile.

But it is also much more.

Jason Johnson, in «REM», deals with particular delicacy the theme of mental disorder, on how much being able to help those we love is often beyond our will, and finally puts a powerful reflection about the spells we cast on ourselves, and on our loved ones, by speaking out our most intimate fears.

He does it with a masterful crescendo of tension that culminates in a distressing finale, in which normality and destruction, which we have discovered can coexist, merge. 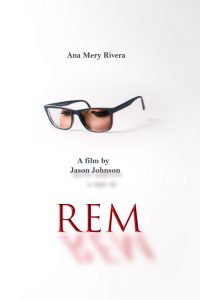