With a sensitive gaze, but capable of looking into the depths of the human soul, the director Julián De La Chica takes full advantage of this opportunity to tell a different story of existence in the pandemic.

The lens of the life experience through which this film is built is that of an immigrant woman, precarious, in an LGBT relationship, far from her family, who tries to build a future working as a hairdresser but is forced to make other decisions to survive, while she is increasingly alone in an already hostile world.

Dora and her partner Ernestina are two sensual and delicate figures, evanescent like the lives of the last ones in a period of isolation and lack, who have struggled to realize their dreams, but who have seen hope escape from their hands for lack of possibility.

«Dora» is a poignant film, full of the poetry of everyday things, enhanced by a refined use of light and black and white film, which leaves with a bittersweet flavor but a new awareness of the life of an Other, singular and universal. 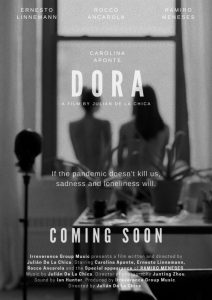