Posted at 16:00h in Reviews by prismaadmin

The charm of a tight setting and of a two-character screenplay in the morbid atmosphere of the famous 1981 screenplay, from which the film is based, does not seem to be affected by the passing of the years.
But it would be very reductive to call this film a simple remake.

Forty years after the publication of the play “‘Night, Mother”, which earned the author Marsha Norman a Pulitzer Prize, this analysis of the complex roots of suicide, and of the difficult relationship between mother and daughter, finds a new formal and expressive force through the road taken by John Patrick Lowrie. The great added value lies in having made an adaptation by inserting it into the covid-19 scenario, a reality that has amplified isolation and pain in American families, so we see that the agony with an announced epilogue takes place between the two characters via a zoom call.

On a formal level, this choice makes the theme of frustration in communicating current, and in some ways, restores a certain vitality to some of the lines that in the past have been transposed to the big screen with difficulty because they were designed for theatrical acting.

«Night, Mother» is, in the end, an opportunity used splendidly by both the director and the actresses. 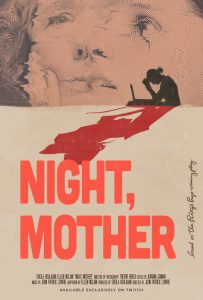