Posted at 19:26h in Reviews by prismaadmin

“Mirrorball” more than a simple short film is a real experiment. In fact, Anna Hofmeister’s film deals with deeply human feelings and meanings, while exploring new and fascinating languages ​​and forms. The protagonist of this short film is a disco mirrorball. The assumption, absurd to the point of suggesting an animated film, turns out to be incredibly exciting and deepens the complex relationship of empathy between the viewer and the film. It is impossible to look at this ball without feeling a strange emotional involvement that makes the object resemble a human being in flesh and blood, engaged in his search for a place in the world.

Anna Hofmeister reminds us how easy it is to abstract poetry and humanity to its highest level, to the point where life turns out to be a matter of purpose, fear and need and not just a tangle of flesh and breath. From a visual point of view, while not relying on professional means, the film proves to be able to suggest interesting compositions, experimenting on the placement of an object in a different context. Form and content come together in an original and absolutely personal dimension that strongly affirm the artistic personality of Anna Hofmeister. We hope to see more material from this young visionary director soon. 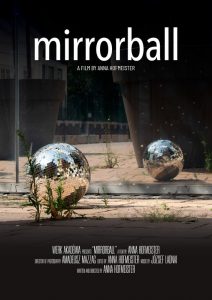