“A Movie with Subtitles” by Ömer Faruk Aykut

15 Nov “A Movie with Subtitles” by Ömer Faruk Aykut

Posted at 18:58h in Reviews by prismaadmin

In an open space, two young strangers start talking about this and that.
Apparently nothing strange, but their “dialogue” reveals an increasingly disturbing reality.

As the title suggests, the words this film is made of are not spoken but written. An interesting choice by the author, which acts as a narrative expedient for the purposes of the plot, but which also, from a formal point of view, forces the observer to watch and read carefully every moment.

In this short film, set in the near future, the author skillfully uses dystopia as a lens to deal with the theme of incommunicability and fear, and language as the only means that allows human beings to distinguish themselves and recognize themselves as similar.

The two main characters and the setting of “Movie with subtitles” are anonymous, universal, we do not know their names or what is the reality from which they try to escape, we know them immersed in history and out of time, subjected to an injustice that to the observer will seem frighteningly likely in the contemporary we live in. 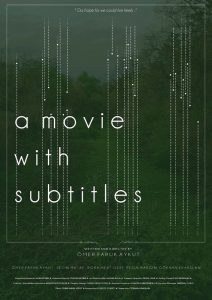