Posted at 13:34h in Reviews by prismaadmin

«Kontakti», written and directed by Toni Majaniemi, follows the professional and private life of Inspector Mälkiä, who becomes too involved in the subject of his investigation.

The main character is a complex figure, outlined beyond the archetypes and stereotypes on which the police genre has based its fortune; a commissioner extraordinarily capable of showing us the facets of the humanity of a man increasingly stuck in the heinous case he tries to solve.

But the real protagonist of this sophisticated noir is conscience, taken to the extreme limit by a crescendo of violence, which is here a tangible physical entity that destroys everything around it, and suspicions that move on multiple layers. In this story, reconstructed in great detail in a not too distant past, but timeless in its contemporaneity, there are no innocents and the possibility of redemption is not promised.

Far from just being a well-made genre film, Kontakti is an incredible display of film-making skills and sensitivity, both in the director and in the cast. 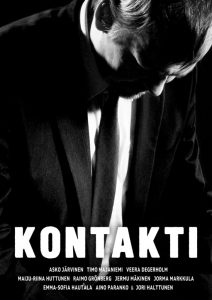