“A Friend For Dinner” by Max Bramley

08 Nov “A Friend For Dinner” by Max Bramley

Posted at 13:07h in Reviews by prismaadmin

«A friend for dinner» is the perfect short film to watch on a dark late autumn afternoon, for fans of independent horror but not only.
In the frame of the most classic setting of a story of terror, the company between two teenagers, alone in a villa, becomes tenser and tenser until it reaches the most disturbing of epilogues.

In this tale of isolation, the narrative climax is constructed by drawing on both the quintessential gothic tale and the new mumblecoreish indie horror.
The aesthetic of the film is characterized by bold photography, which uses light switching from pitch dark to almost overexposed, underlining the altered states of consciousness of the protagonist.
Young director Max Bramley wisely mixes lyricism and splatter to give us a creepy and skillfully crafted exercise in cinematic tension and a cutting edge exploration of a teenager’s descent into a maelstrom of paranoia and violence. 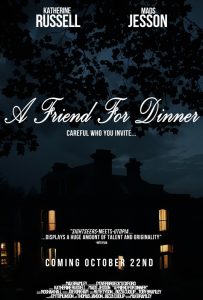