“Stuck In The Sand” by Kendall Christianson

05 Lug “Stuck In The Sand” by Kendall Christianson

Posted at 11:48h in Reviews by prismaadmin

With “Stuck In The Sand” Kendall Christianson collects the legacy of the glorious and almost completely disappeared American genre cinema. In this lightning-fast short film, we find that genuine and childish taste for stories, which keep us glued to the screen for minutes or hours with wide eyes waiting (or maybe not) for the ending, which is always liberating and cathartic.

“Stuck in The Sand” is a violent, lively, inspired and dynamic short film, which while gathering the stylistic features and archetypes of a pulp cinema of yesteryear, manages to be profoundly current. In Christianson’s film, two women are forced to fight to the death in the scorching desert. A group of men are the only spectators of this fight that inevitably recalls the gladiator duels in ancient Rome. Here too, in fact, the clash seems to be of a hierarchical nature: they are fighting for an illusory freedom, granted by a higher power. If the film on the other hand manages to entertain and fascinate for the simple narrative assumptions, the story cannot be separated from its deeper meanings. Faced with the terrible story of these two women, we get excited as spectators and as citizens of a society that also manifests itself in films like this.

The editing inaccuracies, the dizzying shots, are all “errors” that actually embellish the nature of this film and bring it even closer to that cinematic legacy of Carpenter and the B-Movies that we love so much. “Stuck In The Sand” is made with the heart and it shows. It would be useless to dwell on sterile criticism: this film has kept us glued to the screen. 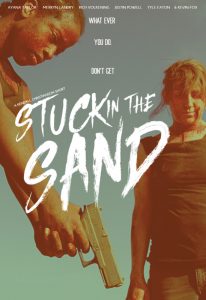