“‘Til Death” by JC Gutierrez

A very normal middle-aged man comes home and starts making dinner. But it’s not a dinner like any other. It is Christmas day in fact, and the guest is dead and is stored in the freezer. These are the shocking and fascinating premises of “‘Til Death”, the film by JC Gutierrez that turned out to be a surprising and exciting short film.

To begin with, from a purely narrative point of view, the short is designed as a perfect mechanism, capable of triggering different emotions at the right time: fun, nausea, empathy and horror manage to coexist in Gutierrez’s splendid script. The short seems therefore to use different tones ​​and genres, but the result is not a synthesis of different archetypes. “‘Til Death” in fact is a film with a strong artistic and cinematographic identity, which originates first of all in the intimate and personal vision of the director, Gutierrez. Behind the narrative mechanisms of suspense and irony, there is a particular attention to the theme of mortality and memory and how all this affects the human soul. In Gutierrez’s vision it seems evident that the real conflict is the unnatural acceptance of absence, rather than death itself. But memories don’t belong to the bodies they inhabit, and that’s why they survive. It is with this awareness that the protagonist can leave the dark abyss of despair and slowly rise up, leaving behind the past, but not the memory. Once this important subtext has been revealed, it is clear that Gutierrez’s film is a refined, well-layered cinematic work, capable of entertaining and prompting reflection. Disturbing and exciting, but at the same time sensitive and profound.
We hope to see him working on a new film soon. 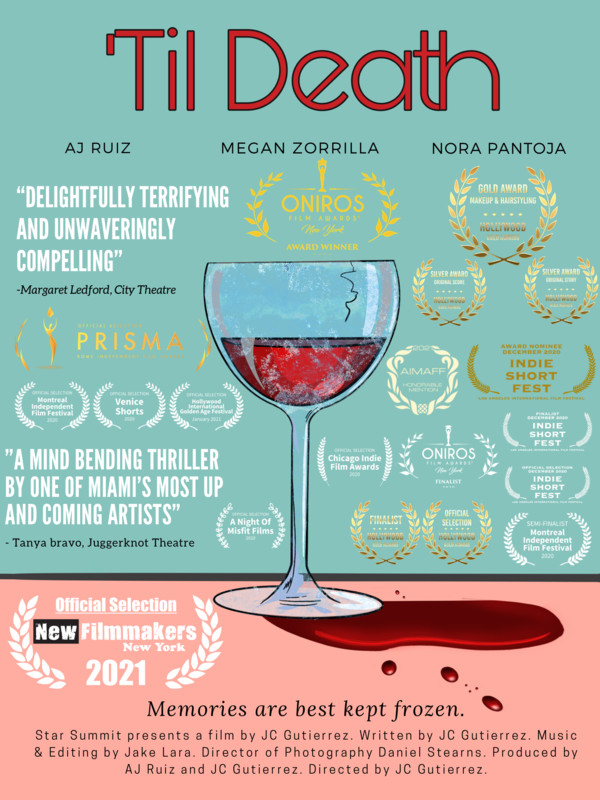