Posted at 09:59h in Reviews by prismaadmin

“Rage” is a breath of fresh air in the independent film scene. By reworking the elements and archetypes of genre cinema, John Balazs manages to create something incredibly new and fascinating. It is not necessary to invent exotic worlds with digital special effects, or to cover the protagonists with abstruse colorful costumes. “RAGE” shows us, in fact, how feelings are still the real spectacular elements: moving from an intimate domestic dimension, Balazs’ thriller begins to expand in all directions like poison between the capillaries.
Following a violent chain of murders and sinking deeper and deeper into the lie, the two protagonists of this story will find the courage to reveal their frailties, rediscovering their love. Michael J. Kospiah’s screenplay does not abandon itself to easy twists and turns and carefully avoids the typical pyrotechnic banalities that we often find in films of this genre. Rather, Kospiah carefully draws a trajectory, a kind of dizzying free fall in which things first seem to disintegrate and then recompose, not without a price to pay. The skilfully composed structure in the script finds its full realization in the staging and in the style of Balazs which seems to complete that (apparent) simplicity of the plot with its elegant and sober camera movements, which dilate the times and rhythms of the narration in a pleasant and exhausting suspense, destined to explode in sudden moments of violence.

Balazs is not only an excellent director who is able to better manage the departments and package a harmonious product. The Australian director is a true author with a personal and virtuous vision. Thus “RAGE” becomes much more than a simple thriller, and naturally mixes with a sincere portrait of human feelings and a tribute to classic cinema. To mix all these elements is a kind of lyricism, of sensitivity, which reaches the audience in a very deep and varied way. In fact, in front of “RAGE” we are moved, we are afraid, we feel anger and finally disquiet and the fascinating narrative structure alone would not be enough to explain all this. Balazs’ formula is therefore winning: pure entertainment and humanity. The result is a complex film that is entertaining but cannot be quickly forgotten or consumed like a simple commercial product. At a technical level, all departments work in harmony to express a precious and fundamental aesthetic sense, thanks to which everything is credible. Ben Luck’s dark and refined cinematography definitively sets the film on the levels of the great genre cinema. A film we will not forget. 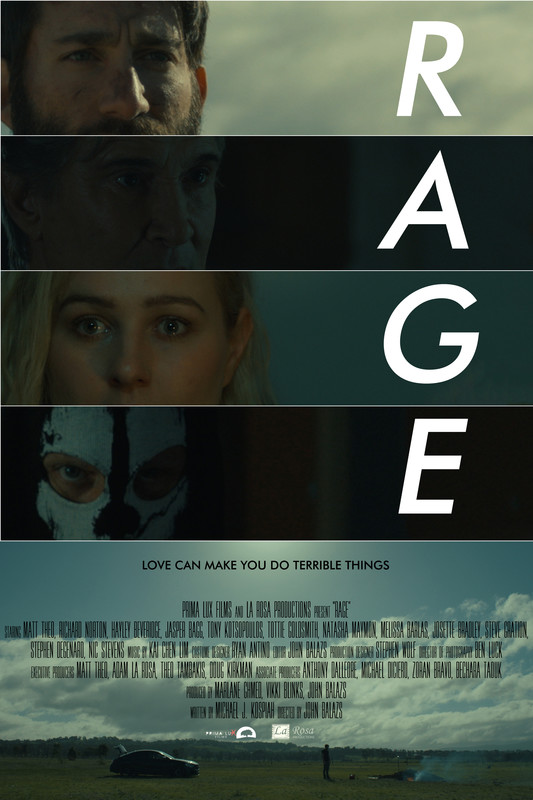