An interview with DASHA KHRITANKOVA, director of “Dream Cafè” 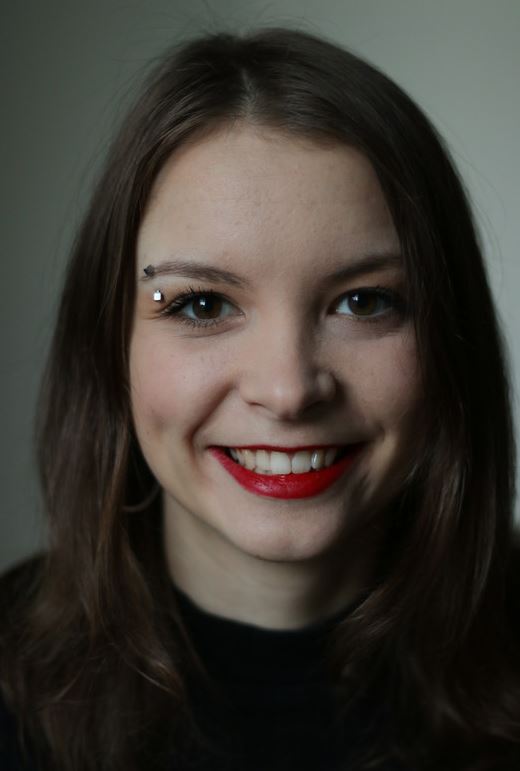 06 Feb An interview with DASHA KHRITANKOVA, director of “Dream Cafè”

Posted at 14:56h in Interviews by prismaadmin 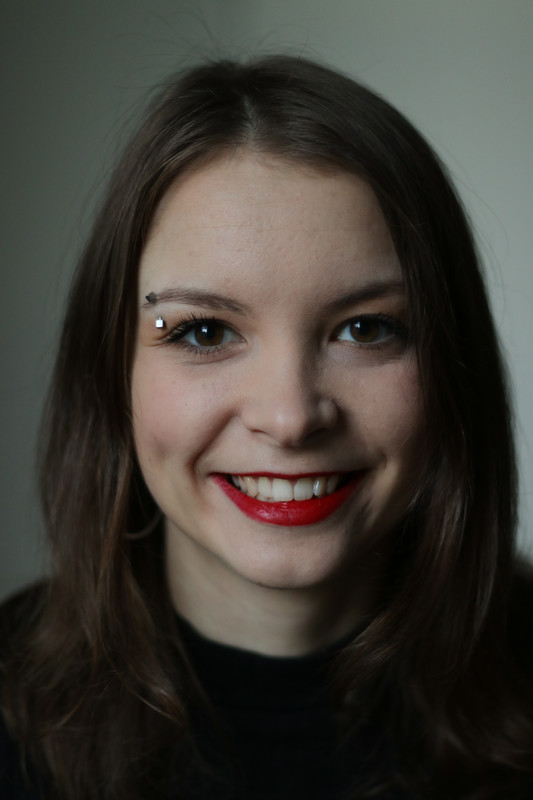 Dasha Khritankova is a producer, screenwriter and director, originally from Siberia, Russia and based in New York. Dasha’s films have been received with success at various film festivals across the globe, earning multiple awards and numerous nominations.

Dasha holds a Master of Fine Arts in Filmmaking from CUNY – the City College of New York. Currently, Dasha is working as a freelance Producer and Assistant Director on both feature and short films. She’s also in the pre-production stage of her next short film, and is diligently working on writing her debut feature. In addition, Dasha is a co-founder and co-director of the New York World Film Festival.

Under The Lights (2019) – Assistant Director 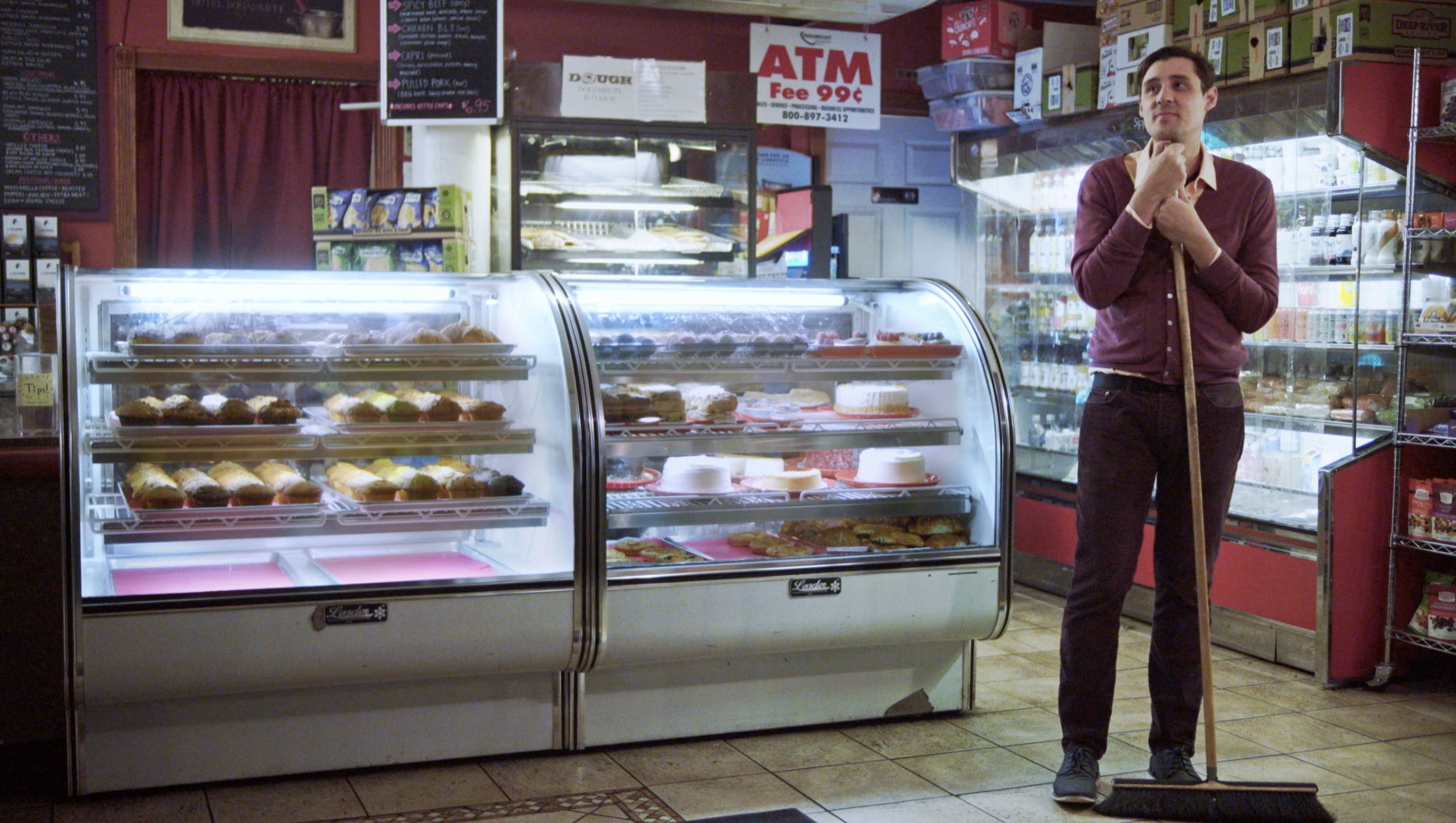 – Your film is truly engaging and exhilarating. It’s amazing how you managed to ry tell a story like this in the short space of a short film. It is a genre that unfortunately is not often addressed in short films. What made you want to tell a stolike this?

Some stories just work better in the form of a short film. If Dream Café was a feature it wouldn’t be interesting to watch, because we would get the dynamic between Nick and Alice too quickly, and there wouldn’t be any room for the development of their relationship. The same goes for Nick doing absurd things to achieve his goal. Nick’s world is too narrow to allow him to go even crazier than he did in Dream Café. If this film was a feature, we would see a lot of repetition from Nick’s actions and his communication with other characters. However, the same exact story can be told in a 15-minute film.  This short but impactful amount of time allows us to see how Nick’s craziness and obsession over his dream slowly builds up until his whole life eventually collapses.

Comedy is something that came into my artistic life unexpectedly and this is ultimately why I chose to focus on this genre for Dream Cafe. Back when I was in film school, I got an assignment to write and direct a short silent comedy. I immediately thought “Oh no! I’m going to fail!”, because I’ve always thought I was the type of a screenwriter and director who makes serious dramas that break people’s heart and make them cry. To my own surprise, the short comedy (called SHUSH) turned out very nice, and was accepted into numerous film festivals across the world, receiving nominations and some awards. That experience motivated me to be open-minded about the genre of comedy and my place within the genre. Working on the screenplay for Dream Café made me realize that you can use comedy for telling serious stories and raising important questions. If you think about it, there is nothing humorous about the theme of Dream Café: a guy goes way over the top trying to achieve his dream, which eventually causes him to lose all of his loved ones. I could have made a psychological drama out of this, but instead I wanted to tell the story in a funny, playful way. I like how it worked out, and I’m working on making it part of my artistic voice and style – using comedy to tell not so comedic stories. 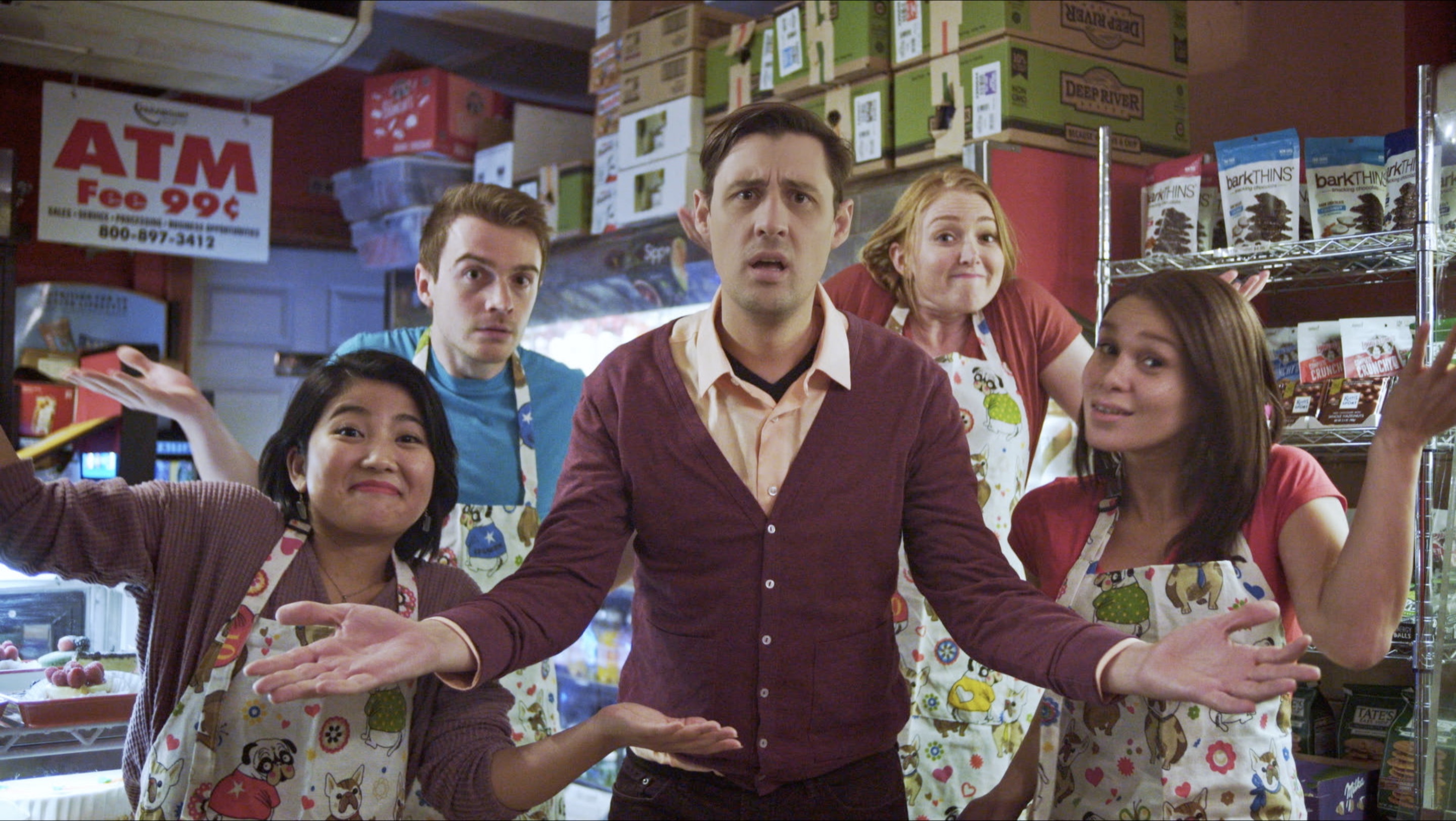 – How has comedy genre changed in cinema today, in your opinion? Too often this genre only becomes the pretext for telling a light and non-incisive film. What, for you, are the new challenges of comedy in the face of the changing world?

Even though I can see comedy being used more in films nowadays, I believe it is still underutilized. It can be a powerful tool for addressing serious matters and telling significant stories. I agree with your statement that most of the time comedy is no more than a way to tell a light story, the kind you would watch after a long day to just chill and give your brain a break. Luckily, however, comedy is slowly starting to be used more and it’s becoming more than just a way to make people laugh and have fun. Some of the recent films had a comedic approach in their storytelling while maintaining the seriousness of the theme. For instance, Three Billboards Outside Ebbing, Missouri (2017) tells a story of an unsolved rape and murder case, while having numerous funny and even absurd scenes. Jojo Rabbit (2019) talks about Nazis through satire and black humor. Ricky Gervais’ recent show After Life touches upon serious emotions, such as grief and depression, breaking your heart and making you laugh at the same time. Comedy in film is becoming more clever and sophisticated. I’m glad to see that humor is being used more and more by mainstream productions. We are living in an era with so many unpleasant things going on in the world, thereby causing audiences to have a high demand for comedic content. It’s great that modern filmmakers try to raise important questions while still entertaining their audience and letting them have fun, even though comedy is not an easy genre to work with. In my opinion, it’s easier to make your audience cry than laugh. It takes a certain skill to make the viewers have fun and make them think of important things. It’s awesome that a lot of modern filmmakers are not afraid of this challenge. I think it adds a lot of dimension to the industry. 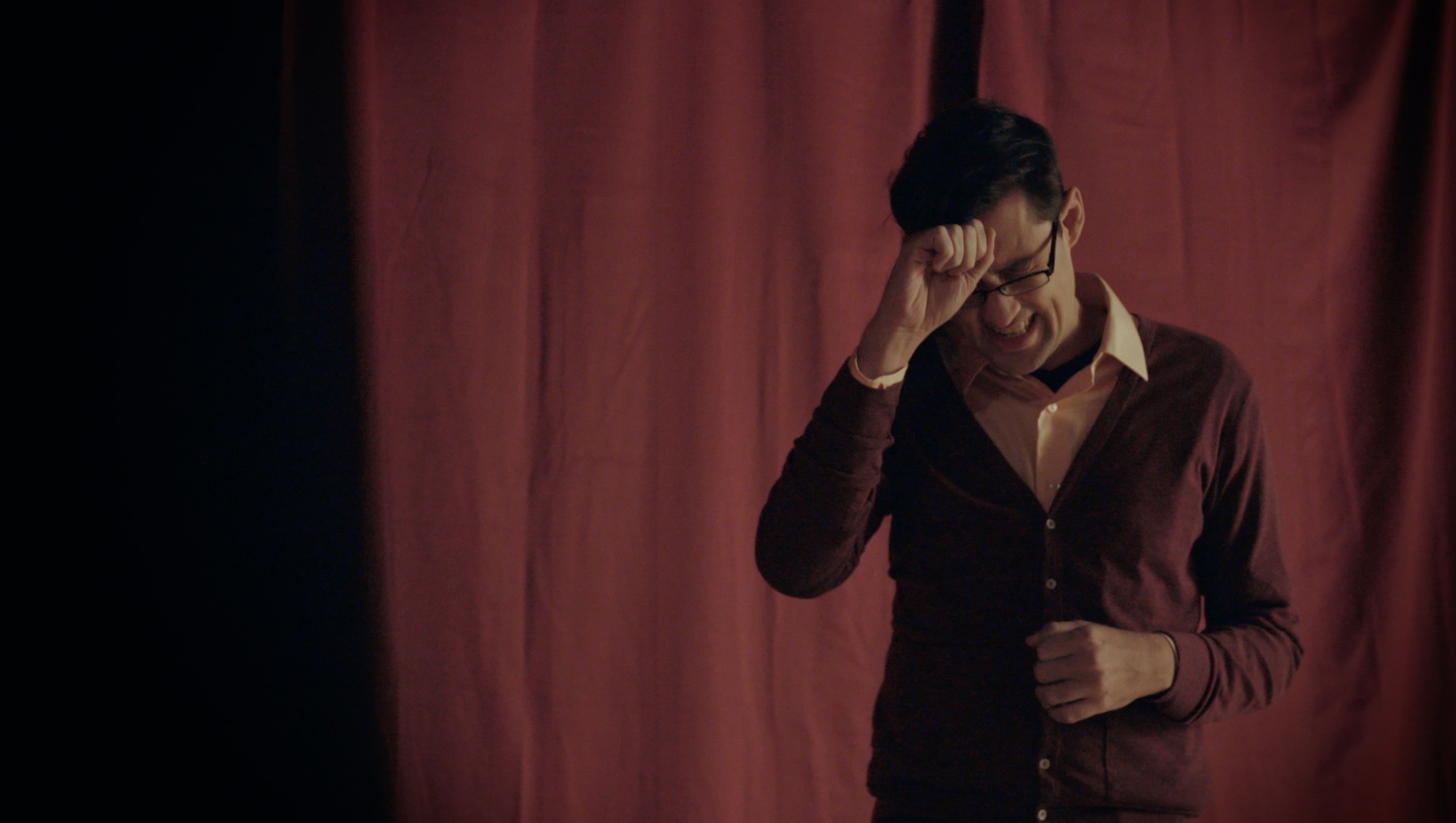 – Your style, aesthetic and narrative, seems to recall a classic, old-style cinema, in the best sense of the term. What are your cinematographic references and sources of inspiration?

My biggest inspirations are Wes Anderson and Woody Allen. I love their clever humor and how they mix reality with surrealism. Their films also have a theater-like feeling, which I love as I come from a theater background myself. As you can see in my film, I’m fond of using wide shots, where you just put the camera on the tripod and let the action happen. Don’t get me wrong, I do appreciate it when a film tells a story with powerful cinematography, using mostly strong images and less dialogue. But I also believe that observing your character in their natural habitat, seeing the character and all the space around them can help you connect to them better, and hopefully make you feel like you are there with your character, inside their story.  Sometimes you can see my characters breaking the barrier between themselves and the audience and interacting directly with the viewers. I definitely picked that up from Allen. Again, this method helps me get the audience more involved in what’s happening on the screen and of course it adds an element of absurdity. It’s like a hint: “This is not your regular movie. Be open-minded about it!” 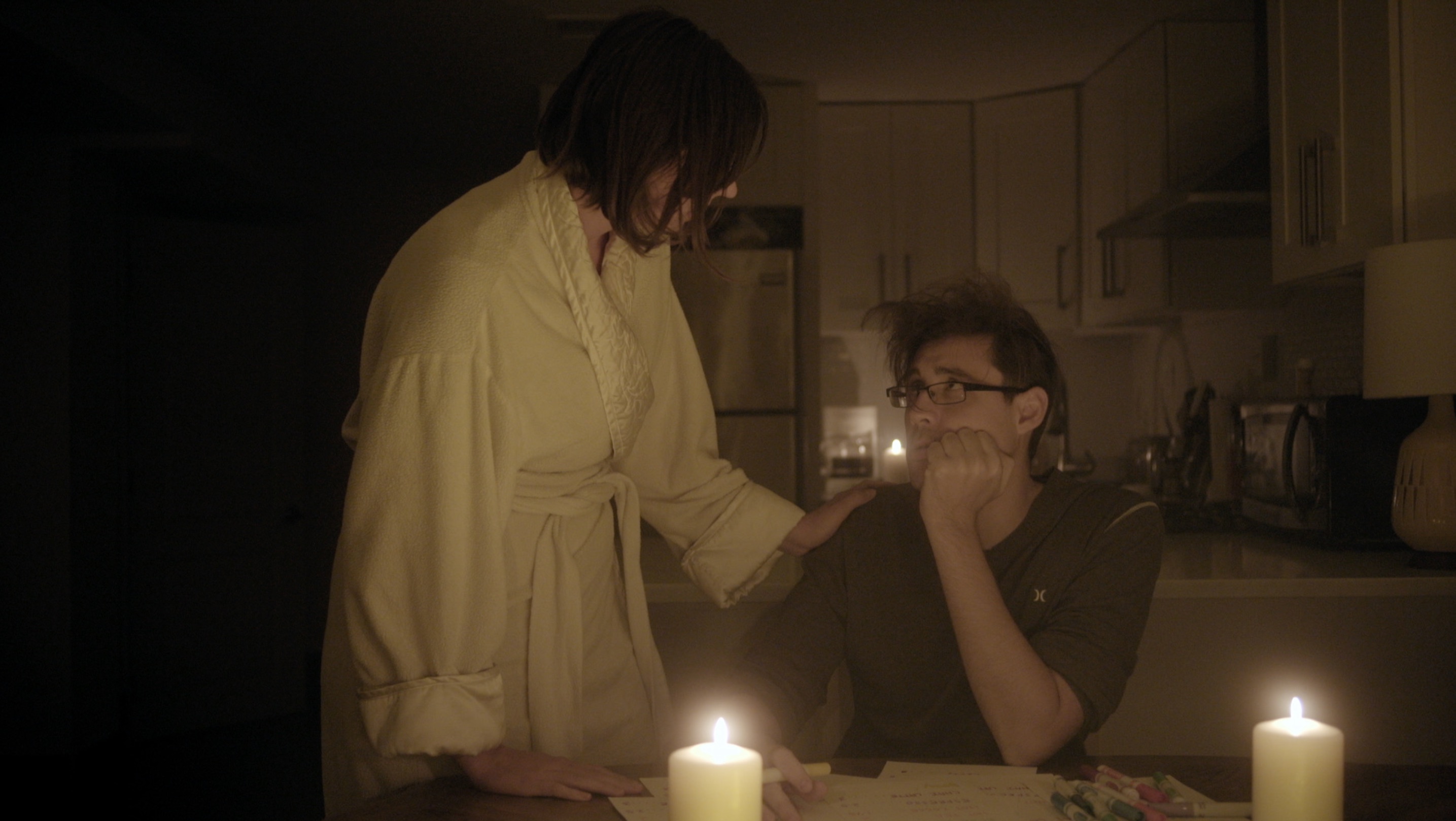 – The film is based on a solid, well-written script. Being also the screenwriter, what do you think of the tormented relationship between the written word and the screen? Are you willing to compromise in the directing phase or do you faithfully follow the script?

In my opinion, being married to the script is the worst thing you can do to yourself as a filmmaker. Even though it’s crucial for me to have a well-though script when I go on set, I’m always open to changing things up even if it happens last minute. I’m flexible if the actors want to change the lines a little bit; I prefer if they say things that feel more natural to them. Also, once you start working on making the script come true, things constantly change you discover something new about the characters when you’re rehearsing with actors. When you see the location, it sometimes may bring changes to the whole dynamic of an entire scene. Once you’re on set, you basically start writing a script again. Sometimes the ideas you had on the page just don’t work out in this setting, with these costumes, and so on. Sometimes you discover new things and new ideas pop into your head and you have to make it work on set while (hopefully) still maintaining the original idea of the story.  Even if your script seems perfect, you just have to compromise on some things when you direct, otherwise, the movie will not work out.

Nevertheless, going on set with a solid script is a requirement to me. I’m definitely not the kind of director who relies on improvisation. I’ve been on shoots where directors just have a basic idea written on the page and they let their actors play around and discover the vector of their storyline while the camera is rolling. I can’t work like that. I like being well-prepared when I go on set. Knowing how we’re going to get from point A to point B allows me to better control the outcome. So, even though I’m flexible and open-minded about changing things up on set, I’m not big on experimenting when the camera is already rolling, and having a well thought out script definitely helps.

However, once you’re done shooting, the script is done. Forever. My biggest advice for directors – burn the script down before entering the editing room. It can be hard when you are the one who wrote the script, but that’s the way it is. Once you have all of your footage you start writing a script again. You have to work with whatever material you have and sometimes it ends up being different from what you originally wrote in the script. Not necessarily better or worse, just different. Sometimes what worked on the page just doesn’t work on the screen (structure-wise, story-wise, etc). While editing, you don’t try to make the film you originally wrote, you rather take your footage and build a great movie from that.