“One Step Ahead” by Robert James

28 Dic “One Step Ahead” by Robert James

Posted at 16:26h in Reviews by prismaadmin

“One Step Ahead” is a long journey into the murky slums of humanity, which in its passionate and disenchanted representation gives us a glimpse of truth. And isn’t it a simple truth that underlies an excellent detective story? For James O ‘Dell things could be more complex than that.
And in fact, what remains after watching the beautiful Robert James’ movie is more than just excitement. The director seems to have reached his full artistic maturity with this work, expanding his talent in numerous directions that make him a complete and refined author. The result is a wonderful epic that we wish would never end, capable of reaching every type of emotion, from fear to excitement, especially thanks to a sagacious and virtuous script. The dialogues, perfectly halfway between the cinematographic construction and realism, give the film the right narrative rhythm, now tight, now more relaxed, and manage to broaden the suggestions and atmospheres of the story, placing the narrative in a large and detailed world , which surrounds the story with murky details.
“One Step Ahead” is also a great act of love towards a classic idea of cinema, rigorous in aesthetics and ingenious in content. A kind of cinema that today has been completely revolutionized (and sometimes distorted) and which sees in authors such as Robert James its possible resurrection.

With this exquisite sensitivity for the classic tastes, the film is enriched with references and depth, without ever falling into imitation. All this gives “One Step Ahead” a strong identity, capable of distinguishing it in the panorama of the genre film, in which it dives with courage, but from which it stands out, with personal intuitions and precise stylistic choices. In this rigorous and complex composition, Robert James has obviously paid particular attention to cinematography, with a strong dramatic impact, which builds lights and shadows with an almost theatrical style, which wraps the film in its own restlessness. And so, among these shadows of the past that rest on well-kept scenography and magnificent costumes, the story reaches its climax, leaving the spectators astonished and happy, “drunk” with faces, feelings, glimpses and reflections. Thanks to “One Step Ahead”, it still seems possible therefore, to see the miracle of an old style of cinema, which we thought disappeared. 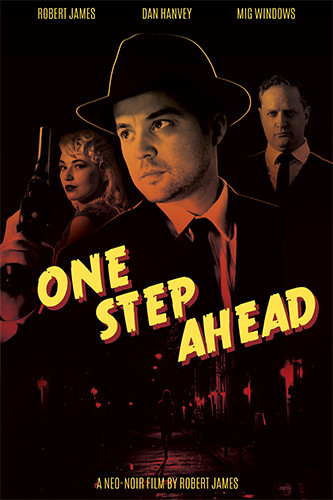