Posted at 19:15h in Reviews by Film Critic

Diagnosis is a short film about the thin line between soundness and illness. In the first scene we see Tanya and her son Jack in a waiting room of a doctor’s office. Jack is playing with his little trains and his mother seems to fear the interview with the doctor, who in fact diagnoses her son’s autism. Back home we see Tanya doing a series of internet research on the causes of autism. The hours pass, time seems to stand still. After the intimate confrontation with his own pain we see Tanya, some time later, talking to Jack through a voice synthesis device. After telling what he learned in school, Jack opens his heart and they hug.

The short film has a very important and delicate theme that is well articulated in the script and in the direction. However, there are some technical defects, for example in audio mixing. Although these may seem details, good technical realization is a really important aspect for the completeness of a work. I would be really curious to see the next short film (why not a feature film) with a more important production that could have more care for the choice of instruments and technical supports.

The interpretation of the actors, in particular of the mother that is the main character of the film is of a good level and makes the spectator empathize with her pain and anguish as well as the new hope and happiness in the film’s ending. 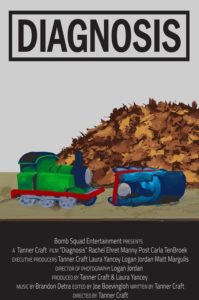