Posted at 11:17h in Reviews by Film Critic

Beauty is the beginning of the tremendous. Blue Funk tells the end of a relationship through the point of view of Aadra, fallen into depression and in a confused state. The almost absence of dialogue and the use of narrow shots on the protagonist is very interesting especially for the composition of the images and for cinematography in general.

From the point of view of directing, the incomprehension and silence of Aadra towards Ivaan, a kind of mirror of her existential crisis, could be better articulated through a dialectic interaction between some extra-narrative elements, as it’s done with the good choice of the soundtrack . Silence, not only being the absence of words but a fertile place, could have been articulated in Blue Funk in different ways.

Even the interpretation of the actors, who played quite well, could have made a qualitative leap with further development of the direction and script. However, the short film conveys an atmosphere of solitude and the search for a lost sense. In the final scene, Ivaan’s rapprochement and his ability to understand and listen, even her silence, could foreshadow a new beginning for the young couple and for Aadra’s freedom. 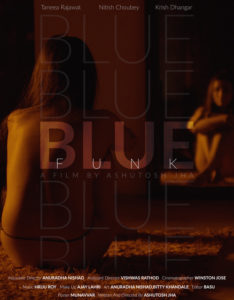