Posted at 08:52h in Interviews by prismaadmin 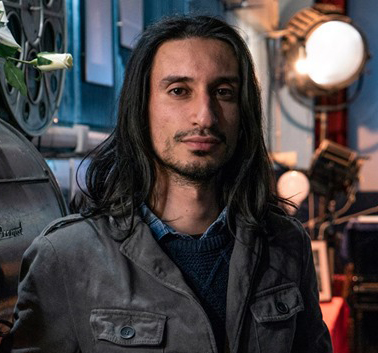 A man looking for silence. A need that is like an oxymoron: in your film it looks like it becomes a universal condition. Why was it so important to represent it?

The search for “silence”, the search for an inner balance, can be read from different points of view based on one’s own experience: there are those who can see it from a psychological point of view, those who can see it from a spiritual point of view, and those who look at it from a strictly practical and materialistic point of view. In my short film it is a journey inside a soul dominated by chaos that, carried to the end, tries in every way a find a shattered balance. Certainly it was a need for a story that comes from my own general inner path and in this case it was framed in a specific period in which the short film was shot.  And, more broadly, everything can be seen as a problem that regards the whole of humanity in the increasingly fragmented and schizophrenic contemporary reality that leaves us less and less space to enjoy the “silence” within an inner confusion that I feel more and more pervading.

The short film was made together with the score composer, that become the leading actor: how was this collaboration born?

I have known Francesco Sottile (the author of the music and the protagonist of the short film) from high school times and we both witnessed the birth and growth of our paths but without ever having had the opportunity to make them coincide. In the specific case of “Nel Ritrovo del Silenzio”, the short film was also born as a representation of a moment of our lives that we have shared and that in some way will remain forever imprinted. It was a long time since the idea of ​​an urban-based short film was in my head, but the encounter with Francesco was the key to the suggestions and ideas I had finding one form. I was in Rome at that time and Francesco came to visit me for a few days from Sweden (where he studied  composition) before returning to Calabria. I knew we would only have those few days to shoot something but I still didn’t know what.  While I was reflecting on the idea of ​​the short film, I found myself repeatedly listening to his song “Calma Ricercata”(the music used in the short are extracts from songs of absolute music composed during the his studies abroad) and suddenly I realized that the very structure of the short film and its meaning were already clearly contained in that piece. At that point the idea of ​​using his music was clear and in a short time also the idea of having him as a protagonist began to take shape. I quickly shot a test video and, reviewing the images on the PC monitor, it seemed to me that Francesco had not only the right face and potential for this job, but also the same emotional state that pervaded me in that period. Therefore we launched into the city at night and, walking around a few hours every night, took some of the material home. As a non-professional actor Francesco has shown great patience in letting oneself be guided in a path that has also been tiring, both mentally and physically, and I find that his test in the short film is absolutely successful. Finally, to complete was I was saying about the relationship with music, during the post-production phase that ended months later, Francesco (at that time returned to Sweden) sent me a new song he had composed for the course of composition, “Introspezioni Immaginarie”, and it was from the listening I did that I began to think I could insert an excerpt to create real opening and closing credits for the short film and that have represented one of the last substantial additions to the structure of the work.

Post-production has been a hand-crafted, elaborate and experimental project. Talk to us about it.

The post-production of the short film was longer than I could have imagined and for several reasons. From the end of filming to the end of the sound mix I continued to edit and reassemble work, altering the structure and adding small additional elements. Being the short film practically at zero budget in the meantime I have realized other jobs that have not allowed me to dedicate 100% of my time to the project. But I think this was just good because it has me allowed to have moments of rest even of several weeks where to be able to return with lucidity on the editing so that it could be balanced at its best. For example, the choice to use the aspect ratio of a smaller and claustrophobic image for the central part of the short, combined with a process of coloring that made the images seem almost “rusty” and abstract, was born only during the phase post-production, as well as the decision to have the opening and closing credits introduce and dismiss the spectator from the rest of the short film. Finally the sound part has been particularly important in this work and, also in this case, took more time than expected. I have always personally supervised the editing of my works and I find it a fundamental phase of the creation of a cinematographic work. I find it extremely rewarding to find the right pace of the scenes, to understand when to let them breathe and when to take their breath away, to find new solutions that can also completely challenge what was done on the set or in the writing phase. In this case was certainly a long and arduous process, where I often edited all night long psychedelic images of lights and visual chaos that in some cases literally made me insomniac.

The film was shot on a very low budget, but looks like a big production. Tell us about your relationship with film budget and how you managed to turn the problem into a solution.

“Nel ritrovo del silenzio” for me was an experiment with which to have fun and play to pull out of the things that until that moment I had never put in my work. And paradoxically, having shot it literally with 40 euros (just the budget for renting an audio recorder) gave me what it is for me the most important luxury that can be had in the cinema: time. Having shot it and edited it by myself I was able to afford much longer processing times than normal that allowed me to be able to think and rethink different aspects of work. As for the audio post-production phase, on the other hand, it was necessary to have an access to mixing rooms and the work of audio professionals to help me bring the sound quality of the short at a level worthy of a cinematographic projection. Obviously in this case it was necessary to use a budget that was co-financed by Andrea Gatopoulos and Il Varco.

Films like this don’t find much space in the short film panorama. In your opinion is this a problem? What is your vision of today’s short film canon?

I believe that the Italian short film market is currently going in a very specific direction where the emphasis is given to products that address social issues, forgetting too often of the artistic quality of the products themselves. It almost seems that it is sufficient to talk about an important topic reaching the minimum technical standard to be able to aspire to be selected in most important short film festivals: there is almost an obligation to shoot a kind of cinema that must have a social function so that it can be recognized and in my opinion all this is something that kills creativity and art. Having said that, however, I must say that I believe in the fact that when a product is born from a strong artistic value, regardless of the “rules” of the market in which it is found, if indeed it is valid and can resonate with the public in front of you, it will always manage to find its own space.

Sound: the dark side of the moon. In your film it has a primary role, an absolute importance. What kind of work do you try to do?

Sound is an essential element in the creation of a cinematographic product. If used well can show aspects not mentioned in the image by cooperating with it to become in some cases even more important. In the case of “Nel ritrovo del silenzio” the sound plays a narrative role, being the force driving the dynamics of the story. But it also has a metaphorical value as sound is the form that the concept of chaos assumes and consequently silence is the form of balance. For these reasons I needed the sound to be treated with much detail, and I decided, alongside Francesco, to put ourselves in the front line in the creation of audio editing and in the creation of different sound effects. About 90% of the sound of the short film is totally recreated and this allowed us to have a huge room for audio manipulation. After a first phase of assembly of the sound then I turned to the experience of Federico Tummolo and Martina Scarpellini to finish and mix the sound in 5.1, adding another layer of creative spatialization of the audio and the realization of a sound experience that manages to immerse the viewer in the world of the images he sees scrolling across the screen.