“We Are Not Together” by Alexander Nezam

11 Mag “We Are Not Together” by Alexander Nezam

Posted at 15:55h in Reviews by prismaadmin

If the purpose of a documentary is that to show you how problematic, painful political and social situations really are, it has to be shown from a precise perspective. Television has accustomed us to scenes of poverty and confinement up to the point that we’re not touched anymore if stories are told from that point of view. We need another approach, something more original, deeper.

What Alexander Nezam chose to do with the film “We Are Not Together” is to make a film that was true to the subject it had to tell. As he states himself, films on the refugee crisis treat oppressed people with a surreal level of detachment. In order to invert this trend, he chose to make his protagonists shoot the documentary themselves, narrating part of it from the innermost point of view that you could possibly imagine.

What we have, thanks to this technique, is a true reportage of unique images, shot from the inside, without any kind of intervention from outside. True, sincere, without any kind of transformation. By doing that, the documentary becomes a precious document on the greek immigration crisis, on what happened after the closing of the european borders that trapped many people.

By seeing how they see, we also feel how they feel, and we’re able to better understand this crisis thought a portrait that is closer to a self-portrait than to a work of conceited reproduction we’re used to see. 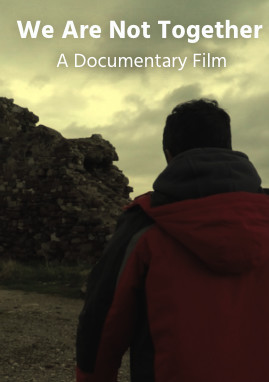