“You and Me” by Yana Zinov

Posted at 15:21h in Reviews by prismaadmin

We are in the era with the highest number of psychological and psychiatric problems ever recorded. The numbers are on the rise, and nobody seems to be able to find a solution. The rhythms, habits and social difficulties of the contemporaneity have really brought many people to the brink of psychosis and depression.

In this short by Yana Zinov called “You and Me”, we can really feel how disturbing psychotic depression can be. The director used multiple characters, all played by the same actor, to represent different parts of a disturbed personality, encaging them all in the room of a metropolitan apartment.

The short has an interesting camera work, emphasizing the emotions with canted, wide camera angles and using music and editing to create a mood where we can really feel all the problems, fetishes, obsessions and fears of the protagonist.

The leading actor plays a very believable role, portraying a complex character with many faces. Helped by the make up and costume department, he really succeeds in creating many aspects of the same role.

Cinematography further creates an atmosphere of psychosis, alternating low contrast scenes with saturated, darker and low-key scenes from the imagination of the protagonist.

“You or Me” makes a very good film about its theme, using an effective language, a cutting-edge soundtrack and a good direction, that deals with a delicate theme with experience and mastery. 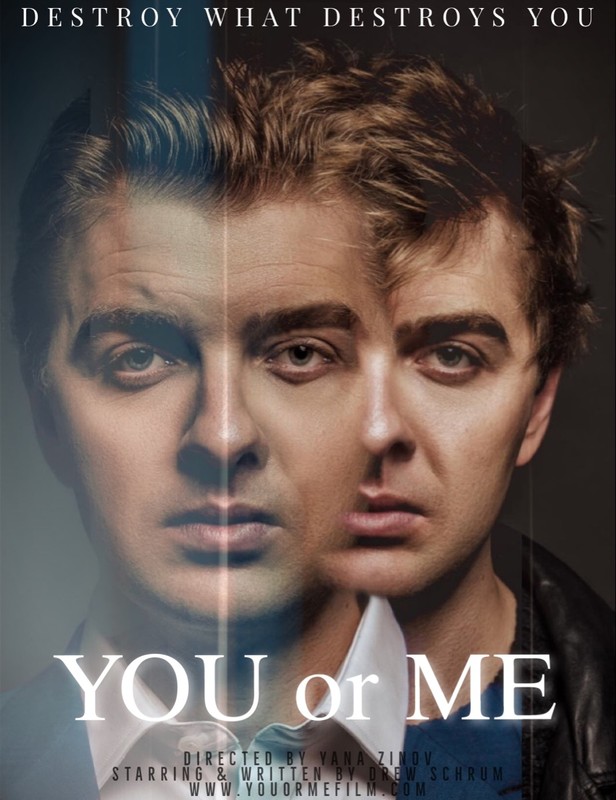