Posted at 11:27h in Reviews by prismaadmin

In the last year the return of genre movies on streaming platforms and in the world market has put aside activism and political filmmaking. It is very rare to see independent filmmakers adressing political themes, social violence and matters of national security, themes that somehow have become unpopular among the young directors.

In this first feature film by Tony Aaron II we delve deep into the harsh theme of gun violence and gun laws in the United States. Avoiding dealing with his personal tragedy, a conservative politician running for office in Oklahoma has to make an interview where he has to answer publicly to his personal tragedy and to the recent gun violence events in his hometown, where mass shootings have reached unimaginable proportions.

The film is mainly told through a series of sequences from all kinds of media: TV, personal shows, newspapers, graphics. We have the constant feelings of information coming to us from all directions, bombarding us with a feeling of anxiety in regard to the shooting crimes raising around us. There are many editing solutions which are at the same times experiments and good ideas. Even if the form might have been made better, the ideas behind the editing cuts, graphics and effects are interesting. The film’s biggest value is in its concept of trigger: violence becomes a trigger that leads to other violence, in a looping condition that is only worsening in today’s world.

The story portraits all the contradictions of the right-wing ideology about national security and gun laws, imaging a sort of dystopia where gun violence becomes the trigger for even more guns on the market resulting in an incremental number of victims.

Even if its lacking in its technical aspect, due to a low budget approach and a very small crew, the film is a very vivid voice of reason and protest in a world where violence is perceived as the answer to violence, even if it’s an evident lie. If more filmmakers would start doing films like this, maybe the population would be more aware of all the contradictions of this kind of political thinking. 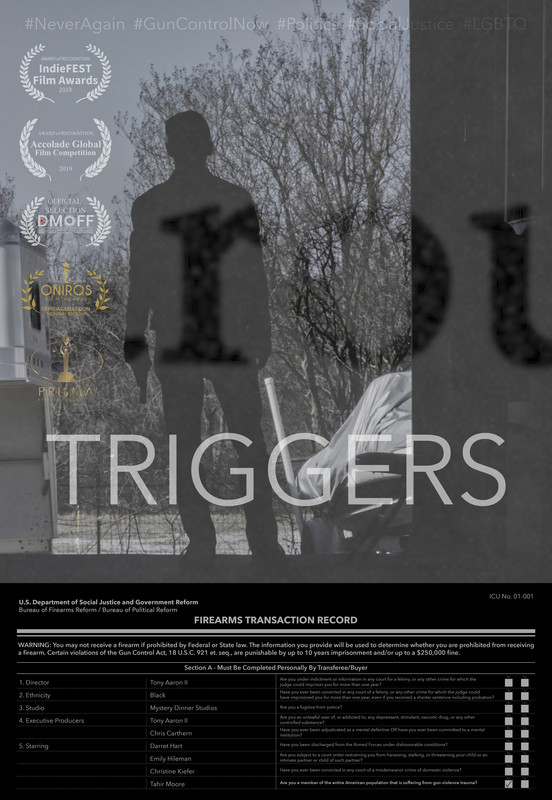