Posted at 09:21h in Reviews by prismaadmin

Entertainment industry has almost canceled the social questions out of the seventh art. More and more filmmakers try to emulate genre movies without a relevant historical content, as a new era of metaphorically “silent” movies appears. This is particularly common in indie filmmaking, where the desire and ambition to become renowned makes it even more common.

This short movie is an exception to this introduction. In “Retail”, the promotion of Abigail to the manager of the store looks like a pleasant event but it’s de facto the moment she is alone in the store, because every other employee has left. Every role in the retail store has been replaced by machines and the only worker is her.

When it looked like she was finally the supervisor of the store, Bertie, an all-knowing machine which manages every aspect of the store takes command on her life, driving her progressively insane in her loneliness.

The film, which is shot with a bluish-cold atmosphere that enhances the dystopian situation, is a very powerful metaphor on the mechanization of human work and the replacement that is taking part in today’s society. Even if it was shot on a low budget, it is a short movie full of contemporary content, that tries to make the spectator think about a major issue of our age.

The leading actress plays a convincing part getting progressively more lonely in a shop without customers until somebody finally comes in returning a toaster. In the only situation where two human beings are in the same room, the machine gives them an error, like it was contrary to the principles of the machine that wants her to be and stay alone.

The final scene, where Abigal says goodbye to the machine and it shuts down, looks like an omen of our era.

All the intellectual work behind it makes “Retail” a very good dystopian short about the destiny of mechanization and about our inhuman age. 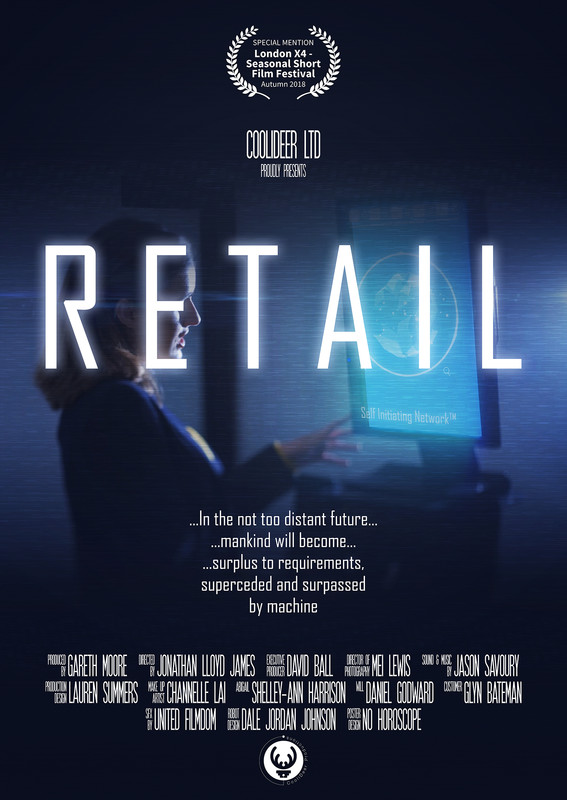