“Give + Take” by Armand Hamouth

Posted at 16:08h in Reviews by prismaadmin

Relationships in films can be rendered in multiple ways: a dramatic approach is the most common, but you can find deep involvement and psychological description of the characters of a film also in comedy, and you can find out more about them while you laugh and have a nice time.

It is the case of this debut short film “Give + Take” by Armand Hamouth, which shows the work relationship between an old lady and a boy who starts caregiving for her.

With a series of gags, we follow the characters while she inadvertently harm him in funny ways and then tries to remedy, to find out that she only worsens things up to the point where they become grotesquely funny.

The two characters play a very entertaining comedy role which is made stronger by a good screenplay. Cinematography is very simple and helps the story by giving it a warm look and a pleasant visual atmosphere. Direction is also at service of the narration and gives the film good pace and rhythm.

Overall, it is a nice comedy with a deep attention for feelings and psychology of its character making it a good debut film. 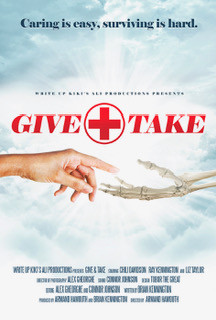