Posted at 10:45h in Reviews by prismaadmin

In times where pop culture seems to have obliterated all traces of past literature from the public debate, it is very important to bring back eternal pieces of greek tragedy to life in a new form. In this very interesting portuguese short film “Before Night Comes – Antigone Speech” by Joaquim Pavão, we see Sofocles’ Antigone staged for the screen in a way that has more than one strength.

This version of Antigone is staged in a film with a mixture of different arts. It is a choreography of dance, theater and film, that finds its center and propulsion in the performance of the leading actress Isabel Fernandes Pinto, which gives us a very touching character. The greek chorus is represented by a multitude of dancers and characters which act on the background, moved by a theatrical direction.

Costumes, make up and set design give the short a very peculiar form, creating a meta-cinematographic stage where the act can be performed as the grecians would have done it: without creating a complete fictional world.

While editing is kind of invisibile – and therefore serves his purpose well – cinematography is high contrast and de-saturated, creating a very hard light look that is part of a greater atmosphere.

We watched and enjoyed this representation of Sofocles with much curiosity and, in the end, we were very happy to see that it was done with good taste and with exquisite culture. 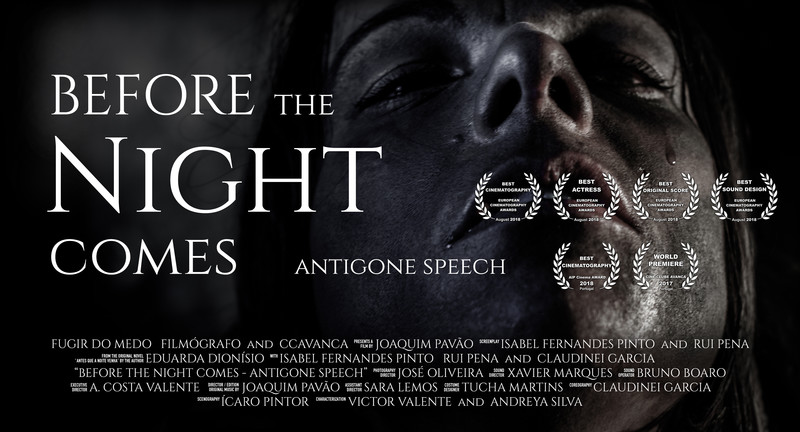