“Because of a Little Apple” by Ksenia Roganova

19 Ott “Because of a Little Apple” by Ksenia Roganova

Posted at 16:30h in Reviews by prismaadmin

The first shot matters. When you play “Because of a Little Apple” you immediately see that there is some serious research behind this short movie, an adaptation of Anton Chekhov “Because of little apples” put into a contemporary context: a mini market and its surveillance office.

The first educated reference is to the biblical episode of Eve giving the apple to Adam, here reinterpreted under a new, interesting light: the two boys act like they have complete freedom inside a metaphorical market that is like the Eden garden, where they can freely express their feelings. By putting a ring inside an apple, he proposes to her and they steal a bottle of Jack to celebrate. What they don’t know is that a surveillance camera is watching them and behind it two men are deciding what to do with them.

In this case, there is an interesting parallelism between the market owner – a sort of supreme, godlike judge – and his thug – his arch-angel -: when they uncover the theft, the roles among the characters are redistributed and the metaphor is complete. The two are punished and are forced to live the place where they have been happy and fulfilled.

This little short movie makes a very interesting adaptation of the original story and stages is with a good flow, pace and direction. The ideas of some camera movements and the lens work – with those wide angle shots to give more depth to the security characters – adds another layer of meaning to the plot and screenplay, and cinematography is elegant and functional to the story. The choice of actors is right for the characters and they also play very well roles that are somewhat complicated.

For these reasons “Because of a Little Apple” makes a very interesting short film made by a promising author. 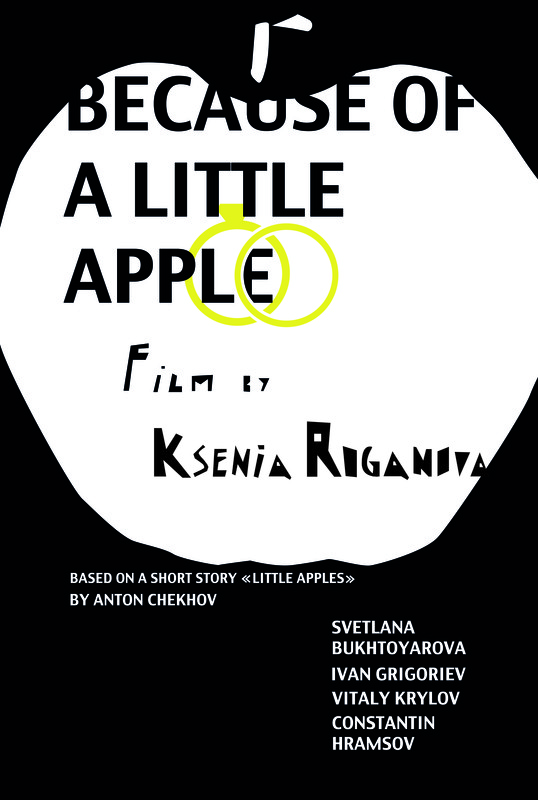